Our New Hats our flying out of our Rainbow Van on to people’s heads faster than you can say “SUP?!” Our favorite rainbow-colored logo’d hats are now accompanied by our new hat with the design by our friends at North Shore Embroidery (http://www.northshoreembroidery.com/)! We now have lots of hats for Mom, Dad, the kids, and all our paddling friends! Not only are they designed differently, but the shape of these hats are more stylish than you have ever seen. Want to see your friends green with envy? Oh just kidding, want to share these wonderful hats with your friends?

Everybody should come to the Haleiwa Bay to check out these hats and see our stylish design while keeping the sun rays out of your eyes! Especially when you are Paddling out on the water;) 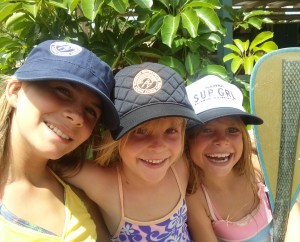 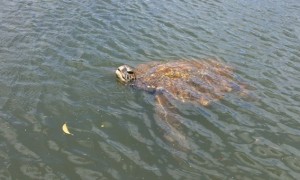 A Ginormous Turtle popping up to say “HEELLLOOO”

Rainbow Water Sports has recently scored some brand-new kayaks perfect for the Haleiwa Bay lesson and coastal adventures! Our instructors will be happy to take you out on the beautiful Anahulu River to experience the same lush views of green and blue all while sitting instead of standing;) Come KAYAK with us and learn our tips and tricks of the day.

We have two single kayaks, and one double kayak ready to explore the North Shore with you! The single kayaks are a great option for dates or a bonding experience together while seeing ginormous turtles popping their heads in and out of the water to say hello! Also, because summertime is here (YAY!!) and family is wanting to visit, this is a perfect option for Uncle Bob or Aunty Ann with weaker knees to still join in on the family fun experience!

We take lots of photos in the 2 hour lesson so the memories will always stay fresh on your minds. Hawaii Kayaking and Stand Up Paddle boarding is an ideal vacationing, enchanting, and enjoyable activity. I mean it says it right in Rainbow Watersport’s motto “We are having too much fun!” 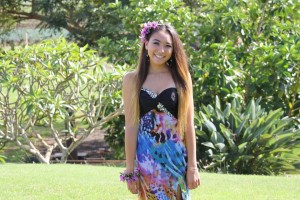 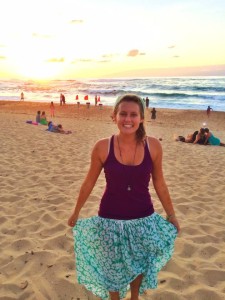 Let’s welcome Tina and Mariah as the newest Stand-Up Paddleboard Instructors! They have been trained by Rainbow Watersports Instructor, Jodi, with emphasize on safety and family fun. Both have been stand-up paddling for years on the North Shore and absolutely love it, so they are super eager to share it with all of you this summer!!

Tina specializes in not only SUP instructing, but also speaking Japanese. She was born and raised on the North Shore and her dad is a pro photographer and her mom is a pro body boarder.. and when we say pro we mean #1 IN THE WORLD!!! Wow, no wonder Tina is so good at all the water sports including body board, SUP, short board, and long board, Tina does it all!
Mariah loves surfing and body boarding, and loves life even more! She moved to Hawaii 2 years ago to challenge her sport abilities and to meet as many wonderful people as possible. She started out as a swim instructor after competing in the top 10 girls in a State- wide competition for the event Butterfly. She has been coaching and instructing since and loves to share her knowledge. You won’t stop smiling when you have Mariah as an instructor on the Anahulu River

We are so happy to have these two wonderful girls join our team for Summer FUN at the Haleiwa Bay!!

How about having some fun in the sun while putting your muscles into high gear for a rewarding 1 hour workout!!

SUP FIT stands for Stand-Up Paddleboard Fitness. It is an excellent, FUN, low-impact cross training workout that is challenging and improves cardio.  Core toning is definitely King, and a keen focus on balance. It is led by one of our favorite head instructors, Jodi Kealoha, who happens to be a certified personal trainer!

Jodi has created a SUP FIT DVD to help us all have more access to this workout everywhere! The DVD is fun to watch, and also leads you in an upbeat 1 hour workout that you can practice at home and then take to the water. The DVD comes with a waterproof guide (for those of us who just need those little hints to get us back on track.)

Buy the DVD or sign up for a Live SUP Fit class with us in Haleiwa anytime.

Oh!! And here’s an awesome teaser to the SUP FIT video:

It’s easy to get to the North Shore of Oahu, and here’s a quick map of the North Shore. Just cruise up Route 99  through the pineapple fields and feel the fresh ocean air flood your car as you descend down to Haleiwa. Rainbow Watersports is easy to find located at the Haleiwa Beach Park. You’ll see the Rainbow van painted with a HUGE rainbow on the site.  Enjoy your trip to the North Shore!

Posted in blog, North Shore, Oahu and tagged haleiwa, haleiwa beach park, map of north shore oahu
Comments Off on Need a Quick Map of the North Shore of Oahu?

Food: Definitely hit up Luibueno’s for some fresh Mexican seafood. Get the seared or blackened Ahi burrito and you’re stoked! Order a side of guacamole for all your chips and you’re in heaven.  The are located right in the heart of Haleiwa town.

Play: The safest and most fun way to get out in the water is to come padding with Rainbow Watersports. Call 1-800-470-4964. All ages and abilities, year round. Come in the morning or evening to paddle along side the gentle  and beautiful sea turtles.

Rest: Be sure to take some time to lounge on any of the beaches. A great beach for families is Alii Beach Park. It’s just around the corner from Rainbow Watersports.

You’re going to LOVE the North Shore in the Summer!

Posted in North Shore, Oahu
Comments Off on Best things to do on the North Shore of Oahu in the Summer!

This post is dedicated to The Rainbow Watersports’ Van — the center hub for stand up paddling fun.  Why a post on The Rainbow Watersports’ Van?  Because it has quickly become a beloved structure of the North Shore.  Paddlers and non-paddlers alike love to pose near “the rainbow van”.   It brings a smile to everyone’s face.  (Sure, some may be laughing at the cancerous rust that is quickly eating away at it, but the smiles are still there!)  We like to think it brings an element of North Shore beachy fun to the community.

Let me tell you a bit about The Rainbow Van:

Our faithful 1979 Dodge has been with us since the beginning of the school.  It began its motor-life more than 30 years ago as a service vehicle for Hawaiian Electric Company, then transitioned to a transporter of clay.  It has now settled into a semi-retirement as The Rainbow Van, and is finally living the life!  Every day it relaxes at the beach, taking in the rays (and salt air) and enjoying the views.  Sure, that salt air is quickly corroding its body, but somehow or other, THE VAN still chugs its way to and from the beach each day.

SUPSURF is proudly displayed on its license plate, and a playful stand up paddle scene enwraps the van, echoing Rainbow Watersports’ emphasis on FUN.  Because really, stand up paddling is all about having a fun time, right?  Local artist Jaime Swim painted the van, and since then she has been becoming well known in the North Shore community.  You’ll find her artwork at the Waialua Bakery as well as local art galleries.  Just like any big fan, the van would like to take credit for her growing fame.

Here’s Jamie back in the day, covering up THE VAN’s monster-green outside with a splash of color:

There have been many, many days when we thought that surely The Rainbow Van won’t last another week, but it continues to chug away.  There have been even more days when we thought for sure the walls, which somehow remain though unattached to the top of the van, or, in some spots, the bottom, would burst outward, like a cartoon car!  But somehow the doors continue to open and close, and the holes in the floor and roof continue to “self-clean” The Rainbow Van during a rainstorm.   It must love its life!

And others love it too.  When I have mentioned to paddlers that we will soon be retiring The Rainbow Van for good, their reaction is, “No!  Keep it!  It is so fun!”  And so we’re keeping it…for now.  Truth is, there is a replacement van for it that’s being doctored to hold the same character and display for Rainbow Watersports’ love for stand up paddling, but don’t tell The Rainbow Van that — it might fall apart before we’re ready!!

The Rainbow Van’s popularity amongst paddlers and non-paddlers alike have caused it to have its own Facebook page — (don’t worry I won’t let it get to its head.)  Check it out and become a fan!!

Posted in blog, North Shore, Oahu
Comments Off on The Rainbow Watersports Van: A North Shore Icon
On Wednesday April 4th, we broke the record for the number of turtles spotted in the river — with 25 viewings in just one lesson!  From just young guns to big 380 pounders, we saw them all.  Basking turtles, mating turtles, swimming turtles, a turtle missing a fin, even a large turtle that ended up being a snorkeler and not a turtle!  Haha!
They were all enjoying the safety and calmness of the river.  Since they are used to stand up paddlers in the river, they’re not shy in popping their heads up to say “hi”.

These gentle green sea turtles are currently on the endangered list.  This is a good sign they are making a comeback! 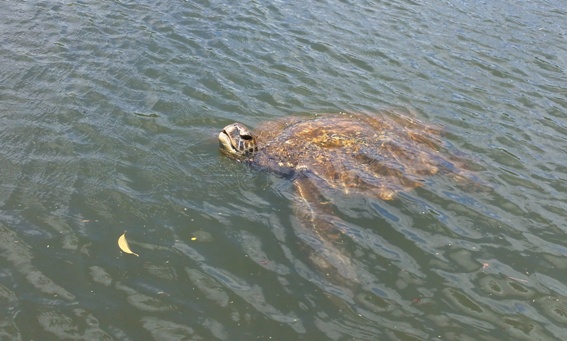 Posted in blog, North Shore, Oahu
Comments Off on Record-breaking Turtles in River